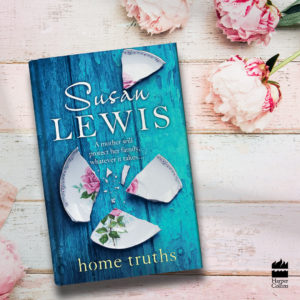 ‘Our five-year-old son had a syringe in his hand,’ he raged, almost choking on the words.

‘I need to find Liam, and when I do I’m turning him in to the police along with every other one of those lowlife bastards…’

He could still hear his wife screaming down the phone, begging him to stop as he tossed his mobile on to the passenger seat and steered the van, almost on two wheels, out of the street.

He’d had enough. He didn’t care about the danger he was putting himself in, or what might happen after, he was too enraged for that. You bastard! How dare you… He’s a child, for God’s sake… The words circled endlessly through his head.

It took a while to get across town. He barely even saw the traffic, or the red lights that tried to delay him, as though giving him some time to think. He didn’t want it. He was past thinking, past caring about anything other than the need to make this stop.

When he reached the hellish streets, the sore at the heart of the sprawling estate, he screeched to a halt on the infamous Colemead Lane and leapt out. He was so pumped with fury that his fists were already clenched, his muscles tensed for attack. His rationale had fled, along with his temper and sense of self-preservation.

He looked around, his eyes fierce. The mostly destitute houses with boarded-up windows and padlocked doors were as silent as graves. The tower blocks at the end with graffitied walls and urine-soaked stairwells rose drearily towards a patched grey sky. Even the pub looked deserted, its sign dangling from one hinge, its barred windows telling their own story.

‘I know you’re here,’ he roared at the top of his lungs. ‘Liam Watts! Get out here now!’

His rage echoed around the silence like useless gunshot scattering over a ghost town.

Seconds ticked by as though the world was holding its breath, waiting to see what would happen next. He sensed he wasn’t alone, that he was being watched, that this was a charged hiatus before the storm broke. He was ready for it. His whole body was primed to take it. There was a scuffling behind him, sharp yet muffled, and he spun round, heart thudding thickly with fury and fear, eyes blazing.

‘Go home,’ a wretched young woman hissed from a nearby alley. She was thin, shaking, her eyes seeming to bleed in their sockets. She waved feebly in no particular direction before stumbling into a side alley and disappearing.

He didn’t see them coming at first, he only heard them: faint, deliberate footsteps crunching, almost military in their pace. He peered around, trying to get a sense of where they were. How many they were.

The sun slipped its cover of cloud, dazzling him, throwing a rich golden glow over the street, as though to paint this purgatory into something glorious.

He listened, hearing his heartbeat, hectic, scared; the sound of a dog barking, a scream cut suddenly short.

Then he saw them emerging from the shadows like ghouls, closing on him from each end of the street, slowly, purposefully, faces wrapped in black balaclavas, baseball bats and iron bars slapping into palms, chains rattling through brutal fingers.

As his survival instinct kicked in he turned to run. He couldn’t take on this many. He’d be a fool to try. ‘Liam,’ he shouted, more panicked than angry now.

He reached the van, tore open the door, but it was too late. A flying brick hit his back, sending him sprawling into the dust.

He tried to scramble up.

A crippling blow to the backs of his knees buckled his legs under him.

‘Liam,’ he cried raggedly as he hit the ground.

A steel toe-capped boot slammed into his head.

He rolled on to his back, dazed, blood in his eyes. He could make out the faces gathered over him in a blur, laughing, as blind to his humanity as to their own.

He crossed his arms over his head to protect it. He tried in the chaos to spot Liam, to beg him to put a stop to this.

Time, reality, slipped to another dimension as his hearing faded and vicious blows continued pummelling his body. He thought of his other children, Grace and Zac, as more blood swilled around his eyes and his teeth were crunched from their roots.

He thought of his wife, his beautiful wife whom he loved with all his heart.

The thudding of boots and weapons grew worse, more frenzied, unstoppable; pain exploded through his body with a thousand jagged edges as vomit choked from his mouth. Darkness loomed, shrank away then tried to swallow him again. Dimly he heard screaming, a distant siren, and somewhere inside the mayhem he was murmuring his son’s name, ‘Liam, Liam,’ until he could murmur no more.

This website uses cookies to improve your experience while you navigate through the website. Out of these cookies, the cookies that are categorized as necessary are stored on your browser as they are essential for the working of basic functionalities of the website. We also use third-party cookies that help us analyze and understand how you use this website. These cookies will be stored in your browser only with your consent. You also have the option to opt-out of these cookies. But opting out of some of these cookies may have an effect on your browsing experience.
Necessary Always Enabled
Necessary cookies are absolutely essential for the website to function properly. This category only includes cookies that ensures basic functionalities and security features of the website. These cookies do not store any personal information.
Targeting
These cookies may be set through our site by our advertising partners. They may be used by those companies to build a profile of your interests and show you relevant adverts on other sites. They do not store directly personal information, but are based on uniquely identifying your browser and internet device. If you do not allow these cookies, you will experience less targeted advertising.
Performance
These cookies allow us to count visits and traffic sources so we can measure and improve the performance of our site. They help us to know which pages are the most and least popular and see how visitors move around the site. All information these cookies collect is aggregated and therefore anonymous. If you do not allow these cookies we will not know when you have visited our site, and will not be able to monitor its performance.
Save & Accept
X